In many respects, Karwan Lodge was borne out of Freemasons who frequently met on the caravan field of organised rallies. The first record of Masonic get-togethers’ in this manner dates back to before 1977, when it was suggested at one of these events, that perhaps there was enough support and enthusiasm to form a Lodge of this nature.

During the next year or two, these common interests of Freemasonry and caravanning, unlocked tight lipped guardians, which resulted in the discovery of a great number of ‘Masonic Romanies’ amongst the caravan clubs of the South. 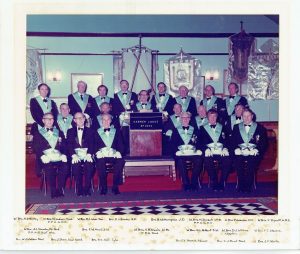 Click Picture to see on separate tag. Not sure of the date.

The talk of a possible ‘Caravanners Lodge’ grew in momentum until, following a rally of about a dozen Brethren it was decided to issue a letter to all those expressing an interest, to attend a meeting in order to ‘test the water’ for the possibility of forming a new Lodge. Following that meeting an offer was extended to one of the Brethren to attend a meeting in London.

The initial contact was issued in the name of Bro. Fred Howe of Hermes Lodge No 5532. Bro. Fred went on to become a Founder and this letter was documented as the first communication within the minutes of the Founders and GP Committee. It invited Brethren to attend a meeting in Clanfield which was the home of W Bro. David Inker, of Justinian Lodge No 2694 (London). This venue being suitable for Brethren from either end of the country. 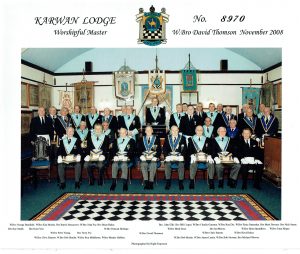 This communication led to an inaugural meeting at which nineteen brethren attended. It is interesting to note that of this original number, no fewer than fifteen went onto become either Founder or joining members of Karwan Lodge.

During the inaugural meeting the fundimentals were discussed, namely that the Founders should be caravanners but also that future membership would have to be attracted from outside this field of interest. However it was decided that encouragement and a little persuasion might be given to those who were not of the ‘Romany’ ilk, to ‘hitch up’ and join the Lodge.

Once the Founders had decided on the name Karwan, which is Persian for ‘Caravan’, the choice of venue had to be made. Many factors here came into play, not least that of logistics. However, at a meeting of the Founders in July 1979, Fareham won the day ! 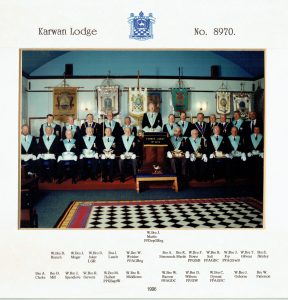 The scene was set for Provincial approval and the long road to Consecration. This duly happened on Friday 27th March 1981, led by the Provincial Grand Master R W Bro T.B. Langton, M.C. at Fareham Masonic hall. The occasion attracted 125 attendees and proved to be a most moving and stimulating evening.

During the next few years the Lodge began to settle down and a routine which produced an inner working which has become unique to Karwan and is much admired by many of our visitors.

The Lodge has now had its special 10th and 25th anniversaries and goes on gaining strength for the future.

If you know what you are looking for on this site you can always use the Search Tool in the upper left hand corner.